It would not be to difficult to calculate how much of my life has been enriched in terms of years, an educated guess would be 3 to 4 years over the past 30.

Walking, hawking, and ferreting in the first 10, followed by working and teaching in the middle, and back to square one for the final 10 on and in this ancient estate was a great privilege, a happy time.

In all of that time conservation and woodland management was high on my agenda, even it it were less so on the part of the owners. The wood was approximately a third of the estate, with its major role being the local agricultural college. As the numbers of agricultural workers dropped, the emphasis was changed. Horticulture, Arboriculture and Animal Care became the leads, with Equine studies, and Practical Habitat Management close behind. To get enough students to remain viable the collage took on large numbers of pre entry people joining police, army, fire service etc. Plus Garden design, Flower Arranging and Hair Dressing. (Me neither).

I had been given free reign to walk and hunt the estate, controlling pest species, such as rabbits squirrels, rats and foxes. With the practical habitat students looking after a breeding flock of rare breed sheep, foxes were not high on the list of popular residents, and with no controls their numbers were out of proportion. Apart from the people on the course, which ran for two years, with 20 students in each year, no-one else did any estate management. In some respects this approach meant the woodland remained natural. Horsy culture and sheep kept the fields in good order, and wildlife thrived.

When I joined, I did something no other tutors did in any of the disciplines, I took my groups outside the confines of the classroom. Some having already studied at the college, had never set food in the woodland, and taken 100 yards from the buildings put them in unknown territory. I would take them deep into the woods, then disappear, causing panic and tears – most did not know which way was up, let alone how to find their way back. But they quickly learned that I was never far away. A totally lost group was cheered up when one of their number, said “I know where his is, I can see his dog”. I peered round the tree to see she was looking at a roe deer. – my dog was a Weimaraner.

I set up a barn owl breeding programme, which, in theory, meant applying for release licences. The licence would not have been granted, as several requirements could not be met, but one was a very useful teaching aid. A survey must be conducted to establish sufficient numbers of mice, shrews and voles to keep the bird fed. This was very important structure as 70% of young owls do not reach maturity, and the number of captive bred, even when properly supported was 90%. Too high to justify, you are only sending birds out to die.

Catching involved the use of Longworth live traps, each student responsible for setting and monitoring 2 traps. A class of 25 meant a minimum of 50 traps, (we had more) and at £70 each, I had to justify the outlay.

This presented problems in the mornings as the students had to either arrive early, or check in the first break of the day. It was fascinating for me to watch their approach to this change, from grudging boredom to excited once they had an animal in the trap. In theory we only need to identify the species, but in practice we weighed and sexed, and of course noted condition and marked them for future identification. A surprising number were caught not just twice, but as many as ten times. Mice and voles were attracted by grain, but shrews being insectivores, need live food, and mealworms wandered off, so we used fishermen’s maggots. (It makes me cringe when I see fishermen warm up maggots in the mouth on a cold day – I had seen how they were produced while catching rats for the Weils disease researchers). Each morning when traps were in place I would be there, checking, watching, waiting, and initially identifying what dropped into the large plastic bag. The response on the youngsters was, for me, worth every moment. Years later I would see one of my groups, now grown up, married with children of their own, and they would relate happy memories of their time with me.

With between 40 and 60 traps set over two to three weeks each year, the numbers trapped where large. Few drew a blank, and if they did, we moved them. With lots of hedgerows and set aside fields we were never short of trapping sites. We caught field mice, often called greyhound mice as they are so quick, bank and field voles, pygmy and common shrews, one startling occasion for the finder a weasel, and icing on the cake – harvest mice. All carefully documented and added to the estate records.

Both before and after my years as a tutor, my activities continued. I controlled the rabbit and rat population with ferrets, spending most of the winter months on my knees, which is probably why they don’t work very well now, my hawks accounted for the squirrels, with grateful thanks from the arboreal department. Squirrels are responsible for huge amounts of damage to trees, especially young deciduous plantations

Two of my hawks, both American species majored on squirrels. My female Red-tailed hawk would have me holding my breath as she thrust her great feet into a drey, I had seen the damage a squirrel could do to the birds toes. She was never damaged, and even caught munjac deer. In fact her first one confirmed their presence. The other, a female Harris had been bitten and dropped on, and hunted it through the bracken to catch her first, after which there was no stopping her.

I spent much of my time, recording the myriad of species, and using plastic cups buried in the leaf litter was a great source of information. It is important to make a hole in the bottom, as otherwise your catch may drown. Among the things caught were baby great crested newts. Long before I set foot on the estate, previous courses had established a large number of ornamental ponds. Both for my own interest, and that of my students, ponds dipping, was a regular feature. All the usual suspects, including water beetles and dragon fly larvae were present, but also every pond had its share of newts. Just before I retired a plastic liner was made into a wild life pond within the animal care unit. Two years later, much to my amusement, building work on the new facilities was held up because newts had moved in.

The woodland had many ancient oaks, with an under story of rhododendron, some areas of pine, birch through out, and acres of brambles and bracken. The paths were stitched along their edges with a profusion of wild flowers in their season, primrose, wind flowers, orchids, swathes of teasel, tall in prickly, and actively spread by me for the flocks of goldfinches that came in winter. Often astonishing numbers. One of my hawks flew across a small (3 acre) set aside field, which was a mass of thistles and the finches moved aside in a wave motion as she went by, like the parting of the seas, with her playing Moses.

Never a day went by without me seeing roe deer. One morning my dogs reacted to something in the next field. It was a roe buck trapped by his antlers by an electric fence tape (lucky for him, not switched on). I tied the dogs to a post and went in to try an free him, he kicked and bucked, his antlers cut my hands to ribbons and tore my shirt. He was well and truly caught, the tape wound round his antlers at least a dozen times. With my hands now slippery with blood I had to leave him and go to my car, shut the dogs in and find a knife, for I had no chance of unwinding him, the tape was down drum tight. Eventually I managed to cut through the copper wired plastic tape and free him. He bounded away, the tape still on his horns, without looking back. Typically, he never said thank you.

This one is an oddity.

This is a late swarm of bees who had taken up temporary residence on a split rail fence. Judging by the wax that can be seen underneath, it had been there for about a week. Late swarms are small and often the colony does not survive the winter. I collected this one and have amalgamated it with another earlier swarm which will help them both.

This probably dates back to the period when bees were kept in a straw skep and the colony had to be destroyed to get the honey. 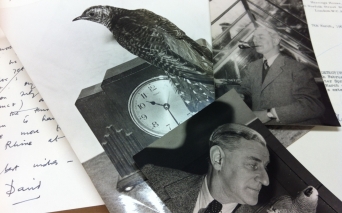 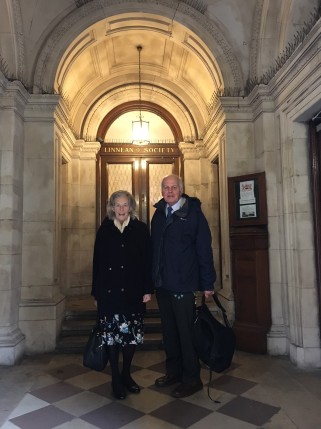 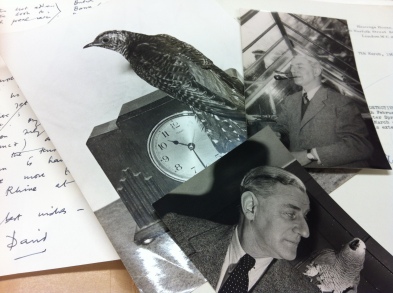 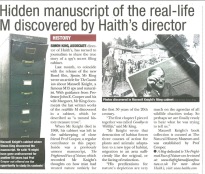